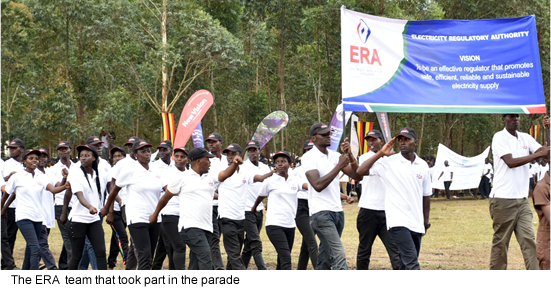 On 9th October 2018, the Electricity Regulatory Authority joined the rest of Ugandans to celebrate the 56th Independence anniversary. The Celebrations were held at Kasasa Grounds in Kyotera District, under the theme:  “Standing tall to celebrate 56 years of Independence”.

The President of the Republic of Uganda, President Yoweri Kaguta Museveni was the Chief Guest. Addressing the gathering at the celebrations, the President re-affirmed the importance of the Electricity Sector in respect to Uganda’s economic development.

He noted that Uganda had enough electricity, and more electricity would be added to the National Grid upon the commissioning of the 183 MW Isimba and the 600 MW Karuma Hydropower Projects.

The President also mentioned that Government was looking at modernizing the Agriculture Sector by launching a number of irrigation schemes.

He added that once farmers embraced irrigation, they would engage in agricultural production all year around, which would boost production and mitigate climate change challenges that have manifested in long droughts.