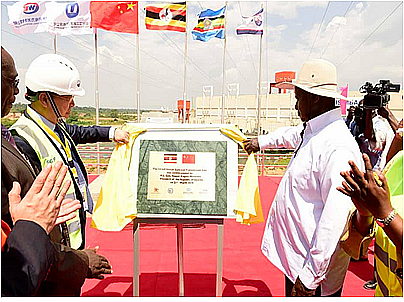 On 21st March 2019, the Electricity Supply Industry registered another remarkable achievement when the President of the Republic of Uganda, H. E. Yoweri Kaguta Museveni, commissioned the 183 MW Isimba Hydropower Plant that borders Kayunga and Kamuli Districts.

Officiating at the commissioning ceremony, President Museveni observed that by commissioning Isimba and other plants that were still under construction, Uganda would have cheap and sufficient power that would greatly support the country’s industrialization agenda.

Speaking at the same ceremony, the Minister for Energy and Mineral Development, Hon. Eng. Irene Muloni, noted that the electricity generated from the Isimba Power Plant would be sold at US Cents 4.16 per unit, making it the cheapest in the country.

The Minister added that the US Cents 4.16 Tariff would be applicable for the first 15 years of the term of the Licence, after which it would reduce to US Cents 1.01 per unit of electricity generated and sold to the Uganda Electricity Transmission Company Limited.

The Chinese Ambassador to Uganda, His Excellency Zheng Zhuqiang, noted that China held Uganda in high esteem as a Development Partner, the reason why China continued to fund and support several development projects in Uganda.

The commissioning ceremony was witnessed by key stakeholders in the Electricity Supply Industry, including the Chairman and the Chief Executive Officer of the Electricity Regulatory Authority, Government of Uganda Officials, Licensees, and Financiers.

On 7th March 2017, the Electricity Regulatory Authority issued License No. ERA/LIC/GEN/017/149 to Uganda Electricity Generation Company Limited (UEGCL) to construct, own and operate the Isimba Power Plant. The Authority monitored the construction progress of the plant to ensure that all works were of standard and implemented as per the timelines.

Construction of the Plant cost US$ 566 Million (about UGX 2 Trillion). The Government of the People’s Republic of China through the EXIM Bank provided 85% of the project costs in form of a loan, while the Government of Uganda financed 15% of the costs.

The Plant was constructed by China International Water and Electricity Corporation (CWE) within 47 months. Commissioning of the dam increased Uganda’s power generation capacity to 1,177MW from 994 MW.