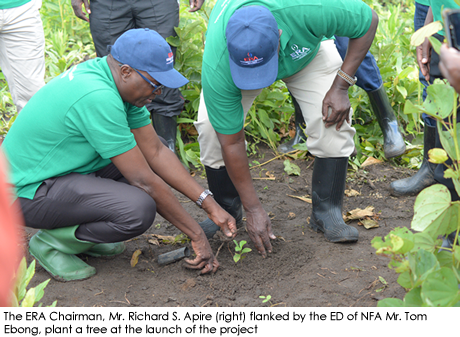 The project that is implemented in partnership with the National Forestry Authority (NFA) is part of ERA’s Corporate Social Responsibility Initiative that targets to restore 60 Hectares of forest cover in Four (4) Central Forest Reserves located in the catchment areas of rivers that host Hydropower Plants/Projects in the Central, Western, Northern and West Nile Regions of Uganda.

The project will be undertaken in a period of Four (4) years and will involve restoration of the forest ecosystem values, including the water and tree stocks lost from the reserves as a result of forest degradation. Speaking at the launch, the Chairman of ERA, Mr. Richard Santo Apire, noted that “the trees planted are expected to support the water cycle in the wetlands that feed into Rivers thus ensuring access to clean water for communities and Sustainable Renewable Energy Supply.” Currently, Uganda’s Installed Generation Capacity stands at 1,246 MW; 80% of which (996.8 MW) is attributed to Hydro power.

The Ongom Central Forest Reserve is located in the Northern Region, in the catchment area of River Achwa, which hosts Five (5) Hydropower Projects with a combined capacity of 135 MW. The other Forest Reserves that will be restored under the project are Wamale, Buwaje, and Laura in the Central, Western, and West Nile regions, respectively.

In the previous financial years, the Electricity Regulatory Authority has undertaken Corporate Social Responsibility Projects in the Health and Education Sectors, offering support for refurbishment of Kilembe Mines Hospital in Kasese District after the devastation by heavy floods; provision of scholastic materials and re-usable sanitary towels to pupils in underprivileged Primary Schools in Agago, Budibugyo, and Kalangala Districts; and construction of Eight (8) Spring Wells in Mbale, Serere, Lira, Mpigi, Kyenjojo, Busia and Nwoya Districts.