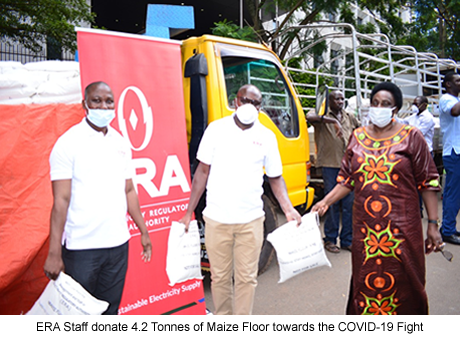 On 4th May 2020, the Staff of the Electricity Regulatory Authority under the Leadership of the Chief Executive Officer, Eng. Ziria Tibalwa Waako donated food supplies to Ugandans affected by the COVID-19 Pandemic.

ERA Staff made a total donation of 4.2 tonnes of maize flour, handed over to the National Covid-19 Task Force, for distribution to people with disabilities whose livelihoods were affected by the outbreak of COVID-19.

The donation was delivered by the ERA Manager Communication, Mr. Julius Wandera, and the ERA Manager Human Resource and Administration Mr. Philemon Mugoya and was received by the Minister in charge of General Duties in the Office of the Prime Minister, Hon. Mary Karooro Okurut, who is also the Head of the Government Taskforce. The donation was received at the Office of the Prime Minister in Kampala.

While receiving the donation, the Minister, Hon. Karooro Okurut thanked ERA Staff for their generosity and for heeding to the President’s call for donations towards Ugandans affected by the COVID-19 Pandemic.

The Minister noted that the ERA Staff donation together with other donations will go a long way in boosting the fight against the Pandemic.

The Chairperson of the Association of People with Disabilities in Uganda Mr. Edson Ngirabakunzi was part of the team which received the donation.