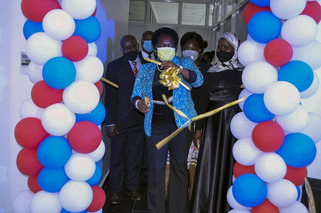 On 30th September 2021, the Minister of Energy and Mineral Development, Hon. Ruth Nankabirwa Ssentamu, commissioned the UGX 26,764,13161 Billion New ERA House, with an acclamation to the Electricity Regulatory Authority for constructing a Green-Smart Building, one of its kind in Uganda with minimal financial resources.

Officiating at the commissioning ceremony held at the New ERA House premises on Plot 5C – 1 Industrial Area in Lugogo, Hon. Nankabirwa noted that Government Agencies need to borrow a leaf while implementing construction works to ensure value for money in all construction works.

The Minister added that with the new House, which provides a good working environment to staff and other stakeholders of the Authority, overseeing and regulating the Electricity Supply Industry will be done in a more efficient and effective manner. She further noted that Government was prioritizing the Energy Sub-Sector Programs because of their centrality to Uganda’s Socio-Economic Transformation as highlighted in the National Development Plan III.

Speaking at the same ceremony, the Board Chairperson of ERA, Dr. Wasagali Sarah Kanaabi, appreciated the Authority Members and ERA Management for their dedicated effort towards supervising the construction of the House, which she said enabled ERA to achieve such a milestone. She commended the contractor ROKO Construction Company Limited and the Project Supervisor (Arch Tech Consultants Uganda Limited) for the work well done.

In her remarks, the ERA Chief Executive Officer, Eng. Ziria Tibalwa Waako, noted that the construction journey was full of challenges which were all overcome due to the Authority and the Contract Management Committee’s efforts in supervising the work done by the contractor. She commended Government for approving the construction of the House which she said was in line with Section 26 of the Electricity Act, 1999.

On 28th May 2018, the Authority signed a Contract with Roko Construction Company Limited to construct and handover the New ERA House. Construction of the House begun on 29th June 2018.  The house was handed over to ERA on 30th September 2021. The New ERA House which has Seven (7) Floors was constructed using internally-generated funds as a green-smart building, making a statement on ERA’s brand promise of promoting Sustainable Electricity Supply.

The New ERA House boasts of modern amenities such as a Gym and fitness center, a cafeteria, a breast-feeding lounge, Prayer Rooms among other amenities.