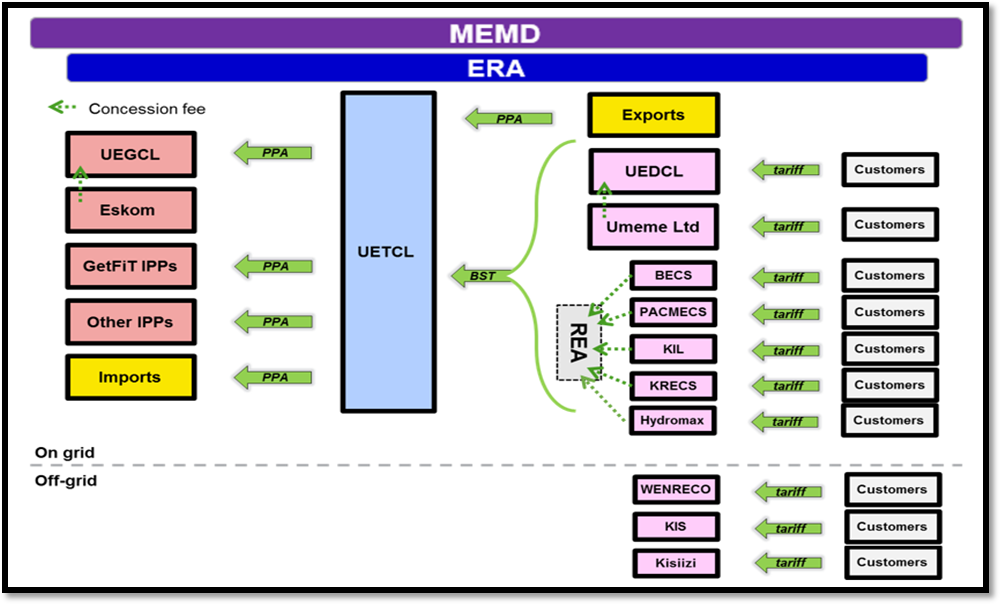 The Ministry of Energy and Mineral Development (MEMD)

The Ministry of Energy and Mineral Development is the Policy head of Uganda’s Electricity Supply Industry to whom ERA is directly answerable. The mandate of the MEMD is to establish and promote the development of Energy and Mineral Resources for Social and Economic Development. The Ministry provides Policy guidance in the development and exploitation of the Energy resources and works with the Industry Regulator to create an enabling environment in order to attract investment in the development, provision, and utilization of Energy resources. The ministry can be accessed at https://www.energyandminerals.go.ug.

The Electricity Regulatory Authority is the legal supervisor of Uganda’s Electricity Supply Industry. ERA was established in the year 2000 as a body corporate, with the capability to sue or be sued. It consists of Five (5) Board (Authority) Members appointed by the Minister responsible for Energy, with the approval of the Cabinet. ERA also has a Secretariat that comprises of Technical Staff who operationalize the decisions made by the Board.

ERA is mandated by the Electricity Act, 1999, to issue Licenses with the attendant License Terms and Conditions for Electricity Generation, Transmission, Distribution, Sale, Import, and Export of Electricity.  ERA is also mandated to establish a Tariff structure and approve rates of charges, among other functions. ERA is duty-bound to conduct its functions in an Open, Objective, Fair, Reasonable, Non-discriminatory, Transparent manner, and also promote Fair Competition in the Liberalized Electricity Supply Industry. ERA ensures that Utilities earn a reasonable rate of return on their investments necessary to provide a Quality Service at Affordable Prices to the Electricity Consumer.

The Electricity Regulatory Authority has since its establishment presided over a steadily growing sub-Sector that has eliminated load shedding due to increased generation and accelerated Electricity Access for End-Users.

To ensure Sustainable Electricity Supply, ERA has over the years created a conducive regulatory environment and incentives aimed at diversifying the Country’s Generation Mix. Uganda’s Power Generation is mainly diversified across Four (4) different sources as follows: -

The Uganda Electricity Transmission Company Ltd holds a Licenses for the operation of the High Voltage Transmission Grid, the System Operator License, the Export and Import of Electricity License, and the Bulk Supply License.

Because of a conducive regulatory environment created by ERA, a remarkable improvement in the Distribution of Electricity in Uganda has been realized. Energy Losses have been reduced from over 30% at liberalization to 16% in 2020.  The Access to Clean Energy rate has also increased and the legally Grid-Connected Customer Base has grown from approximately 180,000 Customers in 2001 to 1,643,288 in 2020, including Off-Grid Customers.

ERA as the Regulator of Uganda’s Electricity Supply Industry has an established fully-fledged Consumer Affairs Unit (in the Department of Corporate and Consumer Affairs), which handles Electricity Consumer Complaints that have not been resolved by the Distribution Companies. The Consumer Affairs Unit operates a Contact Center that can be reached by the Public on Telephone Number 0200-506000 during working hours (8:00 am to 5:00 pm, Monday to Friday) and across various online platforms. These several contact points are aimed at promoting Consumer Protection, to give the Consumers the opportunity to be heard when they are unhappy with their Electricity Service.

For information on the Licensing Process and Licensing provisions, please see the independent Licensing menu on the ERA Website.