Key Institutions in the Licensing Framework

There are a number of institutions whose authorisation a developer of a renewable power project in Uganda requires in the licensing process.The key institutions are highlighted hereunder and a summary of their contacts is provided in the table. 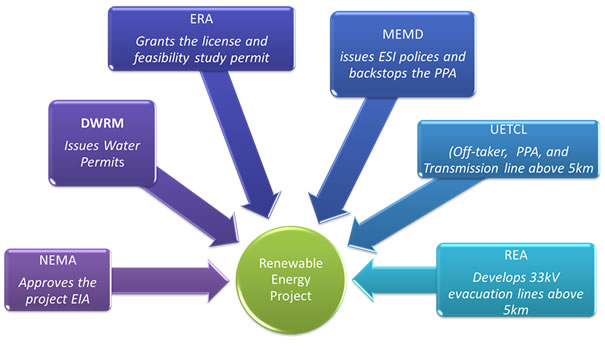 A.   The Ministry of Energy and Mineral Development

The overall responsibility for the Renewable Energy Policy lies with the Ministry of Energy and Mineral Development (MEMD) The mandate of MEMD is to establish, promote the development, strategically manage and safeguard the rational and sustainable exploitation and utilization of energy and mineral resources for social and economic development in Uganda.

The Electricity Regulatory Authority is a body corporate established by the Electricity Act, 1999, Cap. 145, to regulate the generation, transmission, distribution, sale, export and import of electricity in Uganda. ERA is mandated to issue licenses to the participants in the Electricity Sector Industry.

The Uganda Electricity Transmission Company Limited (UETCL) is the System Operator and owns transmission lines above 33kV. UETCL is the bulk supplier and single buyer of power for the national grid in Uganda. It is the purchaser of all generated power in the country that is fed into the national grid. Generators of electricity are expected to sign a Standardized Power Purchase Agreement (PPA) with UETCL.

The Uganda National Bureau of Standards (UNBS) is a statutory body, under the Ministry of Trade, Industry and Co-operatives that was established by the UNBS Act Cap 327 to formulate and promote the use of national standards and to develop quality control and quality assurance systems that will enhance consumer protection, public health and safety, industrial and commercial development and international trade, among others. In this context, UNBS is responsible for developing and monitoring standards for renewable energy technologies in addition to bio fuels technology.

The Directorate of Water Resources Management under the Ministry of Water and Environment is responsible for managing the water resources of Uganda in an integrated and sustainable manner in order to secure and provide water of adequate quantity and quality for all social and economic needs for the present and the future. It is the body that issues Surface Water Abstraction and Construction Permits to Project Developers developing hydropower projects. The same body is also responsible for issuing Water Discharge permits and, underground water abstraction permits.

The Uganda Investment Authority (UIA) is a semi-autonomous government agency operating in partnership with the private sector and Government of Uganda to drive national economic growth and development. The Authority was set up by an Act of Parliament with the aim of promoting and facilitating private sector investment in Uganda. Uganda Investment Authority (UIA) has been transformed into a One Stop Centre offering free services where investors can register their businesses and get all relevant licenses related to their business under one roof.